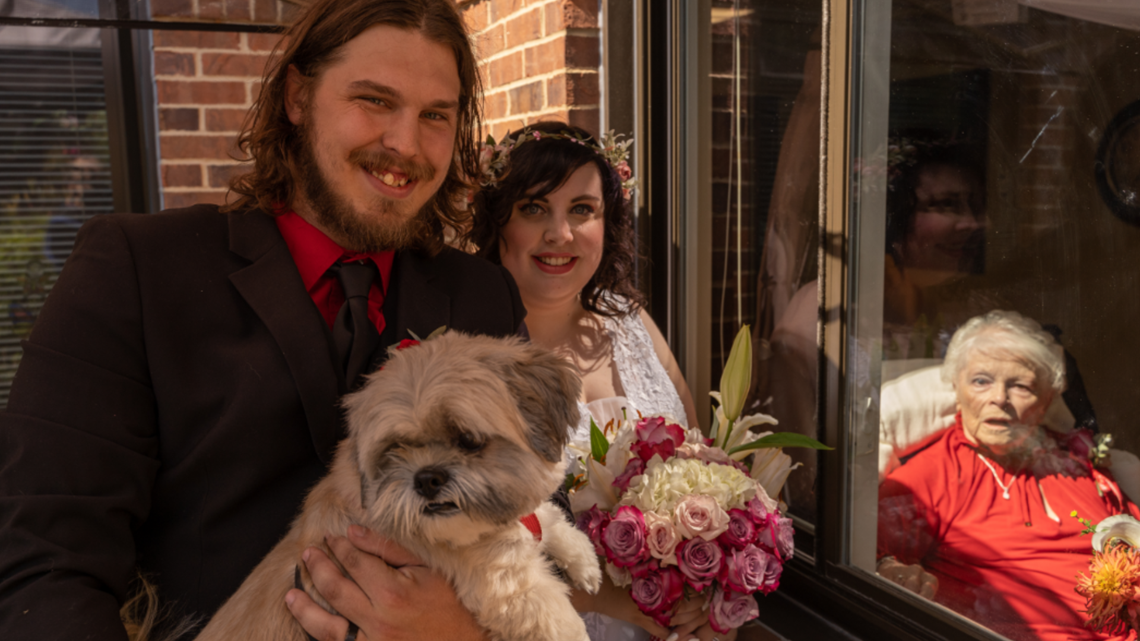 They were separated by glass, but it was a special moment she said she’ll never forget.

On September 25, Emily Befner and her now husband, Seth, got married right in front of a very special person’s nursing home window: her grandmother, Joanne’s.

“When I was walking up to the window, I was trying not to cry cause I could see my grandma and she had the biggest smile on her face, and I waved at her and was like I’m going to cry,” Befner said.

They were separated by glass, but it was a special moment she said she’ll never forget.

“She just started crying and said, ‘I made it Emmy, I made it,’” Befner said.

Befner said her grandma had a stroke in October of last year. The next few days were really hard for the family, they had to process what was happening.

“My mom and my uncle had to make the decision, and my grandpa to put her in hospice care cause the doctors flat out said she is not going to survive and that was really hard to hear,” Befner said.

However, after a month there, they got different news.

“They’re like it’s a miracle, she can go to a nursing home, but we want her under hospice care because we don’t know what’s going to happen,” Befner said.

While at Lincoln Park Manor Nursing Home in Dayton, Befner said she would drive from Upper Arlington almost every Friday.

She said they often talked about her wedding plans and it was a hard conversation to have.

“She would cry every time we talked about it saying ‘I want to be there, I don’t think I can leave, I don’t know if I can be there’ because she’s paralyzed on one side, and I was like ‘grandma I want you there too but I don’t know’ and so it was just a hard conversation,” Befner said.

This was all before they canceled their original wedding date which was scheduled for August. When they did cancel it, Befner said she quickly realized how short life is.

“I’m 28 years old, I have all four of my grandparents, I need to do something about this I want to get married right now in front of them, cause my husband’s grandpa died a week before I planned all of this and I was like we got to go, we got to do this,” Befner said.

They brought that special moment right to Joanne’s window.

“It was just very special, I wish I could go through the glass, but it was just a wave of emotions being there so close to her and having that moment with her, that I didn’t think I was going to get,” Befner said.

She was able to show her grandma her ring and her dress, which she had to find in just two weeks. When Befner decided to do this, they had two weeks to plan the wedding.

She even went to the craft store and got jewels to add to the dress herself.

They set up decorations, chairs and tables outside of the nursing home on the lawn. They also made everyone special masks to wear.

It was a happily ever after moment she said she’ll never forget.