Jane Chung and Chris Gorman stood face to face, with their cheery dog Jupiter gallivanting in the desert dirt. The sunset cast a golden glow and a light breeze cooled the summer air as they exchanged their vows at Joshua Tree National Park.

© Courtesy of The Walk Down the Aisle
Jane Chung and her fiancé Chris eloped on August 24 in Joshua Tree National Park in a Desert Pop Up wedding that started with Chung getting ready at a nearby Airbnb before golden hours vows in the park, with their dog Juniper bearing witness to the celebration.


A pandemic-era wedding was not what she envisioned, but for Chung, eloping in the desert was as memorable as the Van Nuys couple could have hoped for.

“It was just me, him and our puppy,” she said. “It just made it super intimate and super loving. I felt like we were in 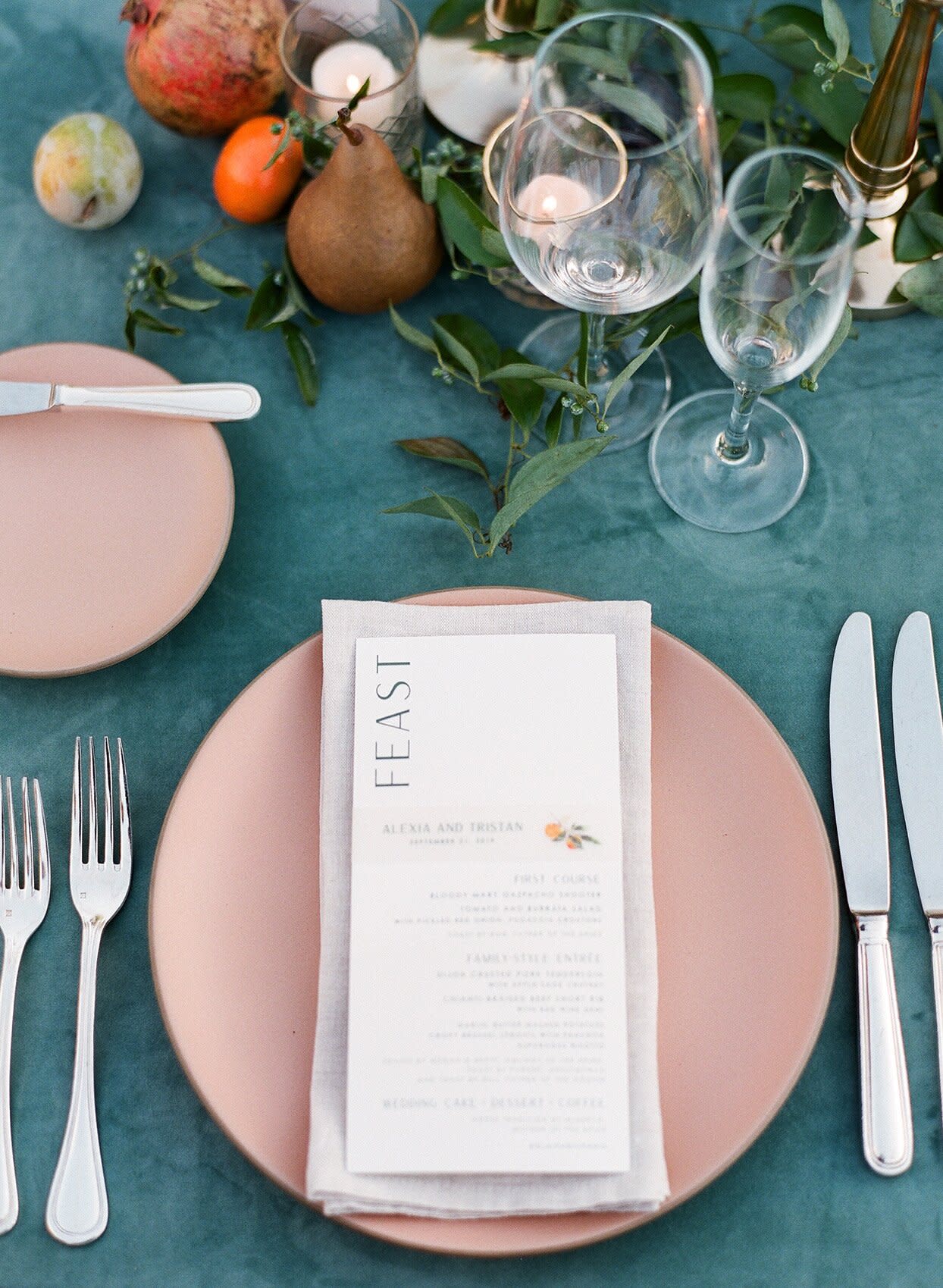 There are many things to consider as you choose a color palette for your wedding, including the time of year, whether it’s a daytime or evening event, and where your celebration is taking place. On top of that, you’ll also want to think about which colors you and your fiancé love, as well as which hues help evoke the mood you want your guests to be in during the party. Still, the process of choosing a wedding color palette doesn’t have to be complicated.

We talked to Kristy Rice of Momental Designs to find out the best way to establish your wedding’s color palette (and pitfalls to avoid).

Related: How Many Colors Should Be in Your Wedding’s Color Palette?

What should couples keep in mind when choosing their wedding colors?

Francisca Concha had other plans for June 27. In a perfect world, she would have enjoyed dinner with family on the deck of a boat cruising through canals in the Netherlands after marrying her partner of three years, Vincent. They would’ve ended the day with friends at a bar toasting their new life as a married couple. But instead, when the day rolled around, Concha, 32, and Vincent, 30, ate cake and champagne for breakfast in their two bedroom apartment while quarantining in the U.K., where they live. “We are known for cracking open a bottle of champagne for no particular reason,” Concha says, “so it seemed like the right thing to do.”

It’s a relationship milestone they’ll never forget. As the coronavirus forced the cancellation of large social gatherings, many couples made adjustments—from Zoom weddings to miniaturized, socially-distanced ceremonies—while others, who delayed their nuptials until next year or beyond,

Every wedding dress needs a tweak or two or more, so find an alterations specialist right away | Weddings

Size up — but not too much

When choosing a dress, make sure it fits your biggest area. For some, that may be the hips and for others the bust or the waist. The rest can be taken in. Otherwise, if a dress needs to be expanded, there may not be enough fabric to let out. That could mean ordering more material, and some designers don’t sell their fabric. Many brides also arrive with a dress that is three or four sizes too large, which creates extra work, which ups the bill.

Every dress alteration involves five or more hours of labor. Hemming a puffy dress or ballroom gown takes more time than a sheath. Beading and lace must be carefully taken apart to make alterations and then put back together again. “It’s very time-consuming,” Pollens says.

“Since March 15, we’ve had several weddings where the couples had bought and paid for rentals of tuxedos and suits online and the retailers simply stopped communicating with them,” Lerner says. “The weddings were happening, and the couples had no response.”

The pandemic no doubt has been a contributing factor, with layoffs, closures, mail delays and shortages of manufactured goods and raw materials in the apparel industry, he says.

“When you have things bought and paid for and you don’t communicate with the bride and groom in the weeks leading up to the wedding, that’s a problem,” Lerner says.

Lerner’s shop, Bel Air Fashions, sometimes has come to the rescue with just two weeks to pull everything together. “We’ve had Zoom and FaceTime calls and after-hours appointments to help couples.”

The clothier stresses the need to finalize your wedding attire six to nine months in advance. And to get everyone

Jane Chung and her fiancé Chris eloped on August 24 in Joshua Tree National Park in a Desert Pop Up wedding that started with Chung getting ready at a nearby Airbnb before golden hours vows in the park, with their dog Juniper bearing witness to the celebration. (Photo: Courtesy of Desert Pop Up/Matthew David Studio)

Jane Chung and Chris Gorman stood face to face, with their cheery dog Jupiter gallivanting in the desert dirt. The sunset cast a golden glow and a light breeze cooled the summer air as they exchanged their vows at Joshua Tree National Park.

A pandemic-era wedding was not what she envisioned, but for Chung, eloping in the desert was as memorable as the Van Nuys couple could have hoped for.

“It was just me, him and our puppy,” she said. “It just made it super intimate and super loving. I felt like we were

COVID-19 regulations that prohibit wedding guests from dancing but allow group sex at approved swinger clubs and adult parties should be reviewed, according to a member of the Gold Coast entertainment industry.

Wedding entertainer Nik Edser said “we have had so many bookings cancelled because of the dancing rules” and has called for the State Government to ease the restriction.

“The irony is if I was invited to a wedding this weekend to attend with my wife and I wanted to dance with her there, then I wouldn’t be allowed to,” he said.

“But if we decided

Kate and Eric: Courtyard wedding featured family heirlooms in every part of the day | Weddings

GAME DAY They married on a Husker bye weekend, which fell the day before what would have been her grandparents’ 50th anniversary. “Every Nebraska bride will understand the struggle in trying to have a fall wedding,” Kate says. They invited 160 guests, with the bulk of their budget going toward guest experiences, like the meal and bar.

SWEETEST MOMENT They’ll never forget reading their vows to each other. “We hadn’t heard them before the ceremony. It melted my heart to hear the words Eric put together,” Kate says. Their ring bearer, nephew Kingston, stole the show with his happy demeanor. He even got offers from other engaged guests to be the ring bearer for their weddings.

UNITED WE STAND They planted an oak seed from the Nebraska Arboretum for the unity ceremony, using mason jars full of soil from the backyards of where they