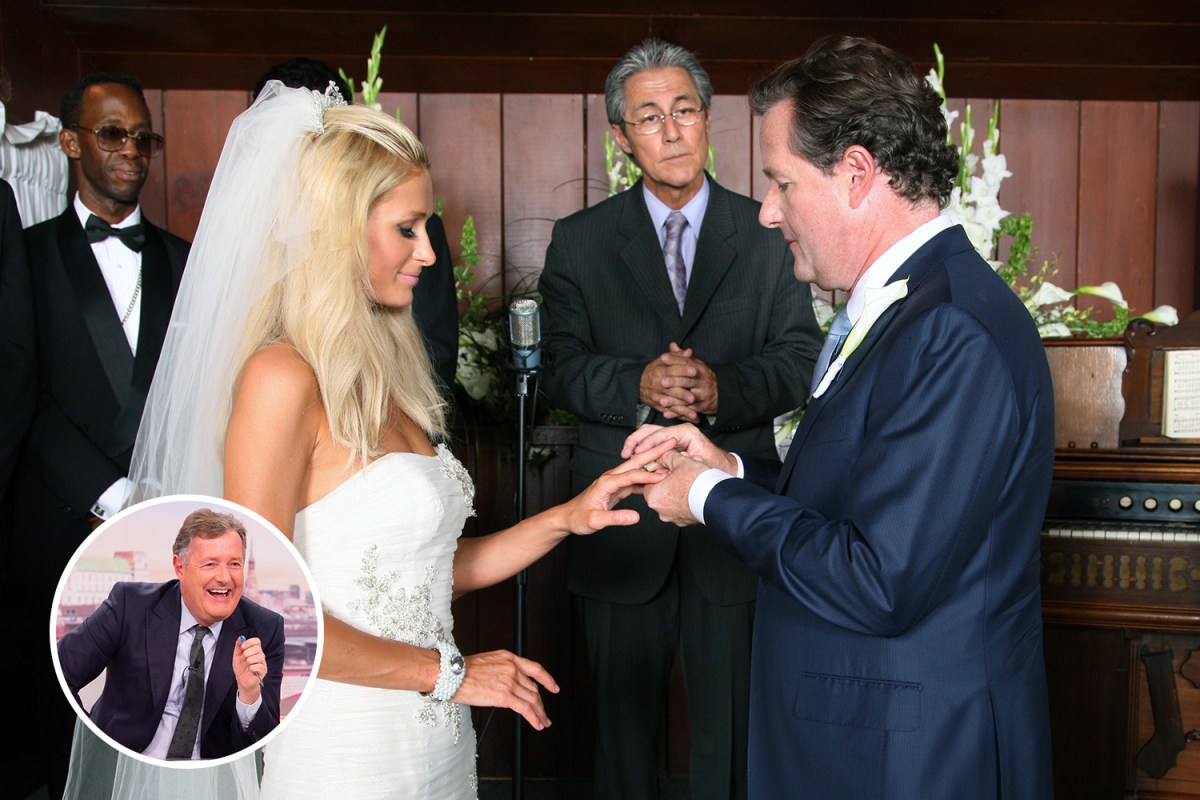 Piers’ co-host Susanna Reid was shocked to hear the news as they chatted to Perez Hilton on Good Morning Britain on Tuesday.

Piers then showed a clip of the moment they said “I do” in front of an Elvis impersonator – but insisted it wasn’t legally binding.

Explaining the incident, Piers said: “She’s still my wife technically. We got married in Vegas for a TV show. True story, there’s video of it.

“We had an Elvis lookalike, a Frank Sinatra lookalike, a Marilyn Monroe lookalike. She wore a beautiful bridal gown, brought a dog with her, I got to kiss the bride, we exchanged rings.”

He added: “My actual wife was a little bit bemused.”

“Does this mean you’re a bigamist?” Susanna the asked him as Piers married wife Celia Walden in 2010.

Piers narrated the clip from the show and told viewers: “It cost is $300 and it was all over in 15 minutes. That’s my kind of romance.”

Paris walked down the aisle to Dean Martin’s ‘That’s Amore’ with her pet Pomeranian Marilyn as a bridesmaid.

The bride wore a stunning ivory dress, designed by Enozoani and a cathedral length veil and carried a bouquet of white roses, while Marilyn also wore an ivory dress.

Piers wore a blue tie, a blue suit designed by Pal Zaleri, shoes by Prada and a white calla lily in his lapel.

There were only a handful of guests at the $300 service, and Piers received a simple band while Paris’ ring was diamond encrusted from US department store, Nordstrom.

After the ceremony the pair celebrated at Planet Hollywood – which is how the idea came about in the first place.

Piers explained at the time: “You know what it’s like, you have a few drinks, spend too long on the blackjack table, get over-excited and decide to do something silly.

“I have to say, Paris scrubbed up to be a very beautiful bride,” he added.

When asked what his fiancée Celia Walden thought of his recent nuptials, Piers said: “When I told her the news, she just shrugged her shoulders sadly and said, ‘How can I ever compete with Paris Hilton?'”

Piers and Celia recently celebrated their tenth wedding anniversary, while Paris is loved up with her “perfect match” Carter Reum.

The star has even given up on her billionaire ambition as she instead focuses on her relationship with entrepreneur Carter.