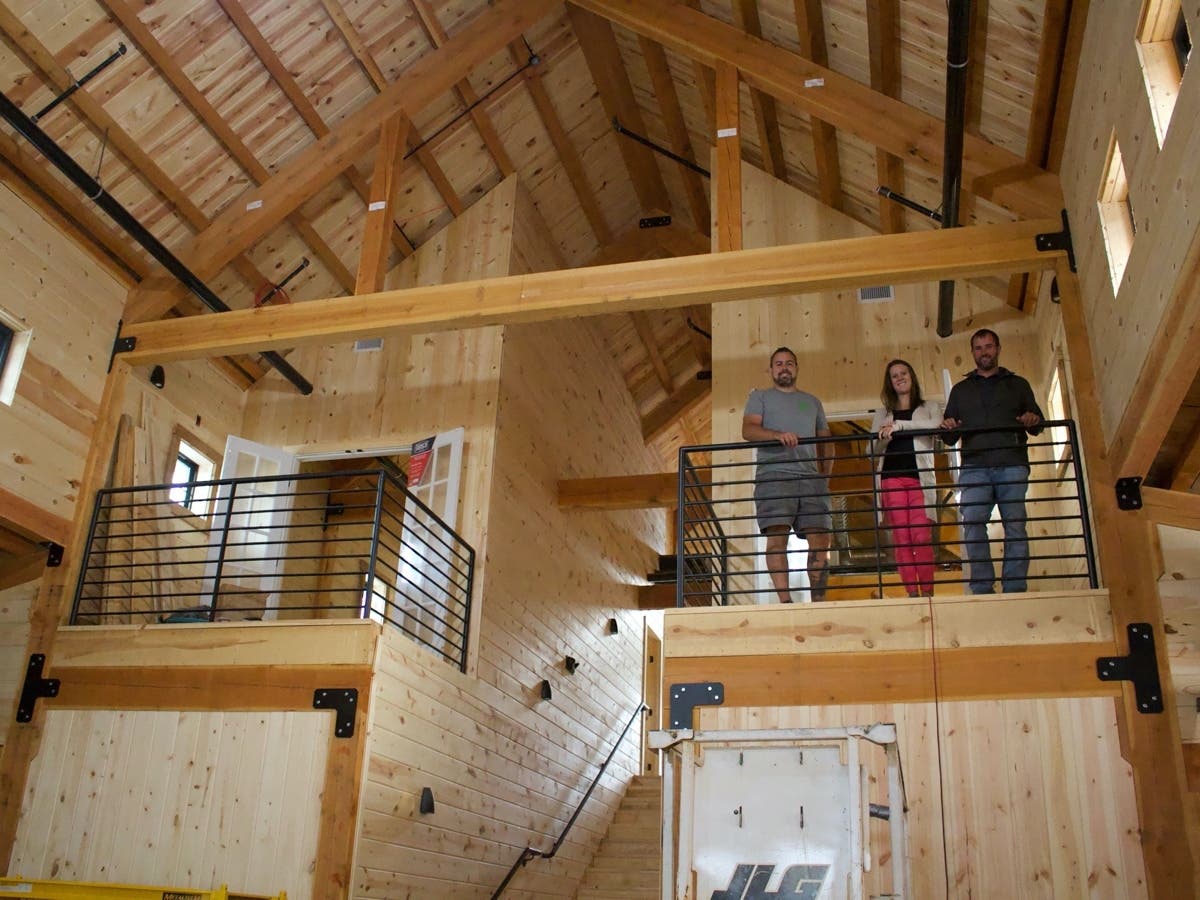 CONCORD, NH — Tucked deep into the woods, along a dirt road nearly a half a mile off Bog Road, will probably be one of the most romantic areas of the city next month after a new wedding and corporate function hall opens in West Concord.

After nearly two years of planning and many months of construction, The Barn At Bull Meadow is scheduled to host its first wedding in October.

The function room became a dream of Justin and Jennifer Stephens and later, Justin’s brother, Eric Stephens, after the couple put together their own wedding and had a hard time finding the right location, with the ambiance they desired, at a price point they could afford. Jennifer Stephens studied event management in college and after exchanging their vows, the couple began to discuss the idea … a lot.

“Where we got married, it was a husband and wife that owned it,” Jennifer Stephens said. “And really, after we got married, we started talking about it a lot more. It was a really interesting thing to think about.”

They discussed the idea with Eric Stephens, who was the groom’s best man, reexamined the wedding and function hall marketplace, sold some of the properties they owned together, and decided to start looking at parcels where they could construct a banquet hall.

“We wanted to take all of the things that we wanted for our wedding, that we couldn’t find, and put it in a barn in southern New Hampshire,” said Justin Stephens.

They viewed dozens of properties around the state — with a focus on opportunities with barns that already existed. But at every property they eyed, there were problems with the buildings or many of them required a teardown — which defeated the entire purpose of trying to find a parcel with an existing barn. Then, they came upon the property off Bog Road and knew it would be the place.

“We fell in love with the property right away,” Eric Stephens said.

The nearly 34-acre parcel had been in the Lassonde family for many years and, like a lot of the parcels in that neck of the woods, had been the subject of development speculation during the last two decades. But nothing ever came to fruition. There was a major brush fire there more than four years ago that burned an old barn and occupied firefighters for many hours.

After discussing the idea with the owners as well as learning about their father — who used to tend the land with a single bull in the meadow, the name was born.

After a year of work, with zoning variances, since the facility is in a residential area, wetland setbacks and planning requirements, as well as other issues, Justin Stephens closed on the parcel in December 2019 for $250,000 and, after navigating the city’s cumbersome zoning and planning process, created an LLC for the project in March.

Join New Hampshire Patch’s Local Business Information Center and let us help you promote what you do in our communities.

And then, the new coronavirus pandemic hit.

Luckily, the Barn At Bull Meadow had a number of reservations on the books before the concrete was even poured.

“We’ve been meeting with couples since January,” Justin Stephens said. “Video calls now (due to COVID-19) … it has been really busy. We have met our quota for 2020 and 2021 is looking great.”

At the same time, the unknowns are huge, especially with a new venture and one that is not like any other in the region never mind Concord. But that is also the fun risk part — it is special and there is nothing like the Barn At Bull Meadow.

“That was part of our angle when we were trying to get the planning board approval,” Justin Stephens said. “I’d be lying if we said that there were times where we were scared and wondered if it was really going to work out.”

But the owners kept on building and are now, just weeks away from their first event — a baby shower for Jennifer and Justin Stephens, some soft openings, and then, a wedding next month.

One of the unique offerings at the Barn At Bull Meadow is a variety of vendors who are already organized to work directly with guests scheduling events like a wedding. The owners said they didn’t want to run a restaurant or a bar and this allows the customer to find nearly anything and everything, at different price points they may want, with the company organizing it from there. The vendors include Catering By Design of Concord, Caroline’s Fine Food of Bedford, City Moose Catering of Nashua, and Great Events Catering in Manchester.

A wooden pergola has been built to match the barn for the ceremony and pictures, too.

“That’s where the bull used to be,” Justin Stephens said.

The barn can host up to 180 guests for all kinds of different functions, too. Originally, they had hoped to get to the 240 occupancy range but the city’s planning board would not allow it. So, they settled for 180 and expect an average of around 140 guests for most events.

It has a portable dance floor that can be small or large. There is also an 1,800 square foot patio with bar service to clients outside, too. If the crowd is smaller, the sections can be moved around the barn to make the areas more intimate.

Now that the building is nearly complete, Jennifer Stephens said, they can relive the joys of wedding planning each day.

“We’re kind of young for thinking that we wanted a career change,” she said, “but the prospect of being involved and relive the wedding day, the magic of the moment, it was too exciting to just squash as a broken dream.”

For more information about the company, visit BarnatBullMeadow.com.

Got a news tip? Send it to [email protected] View videos on Tony Schinella’s YouTube channel.