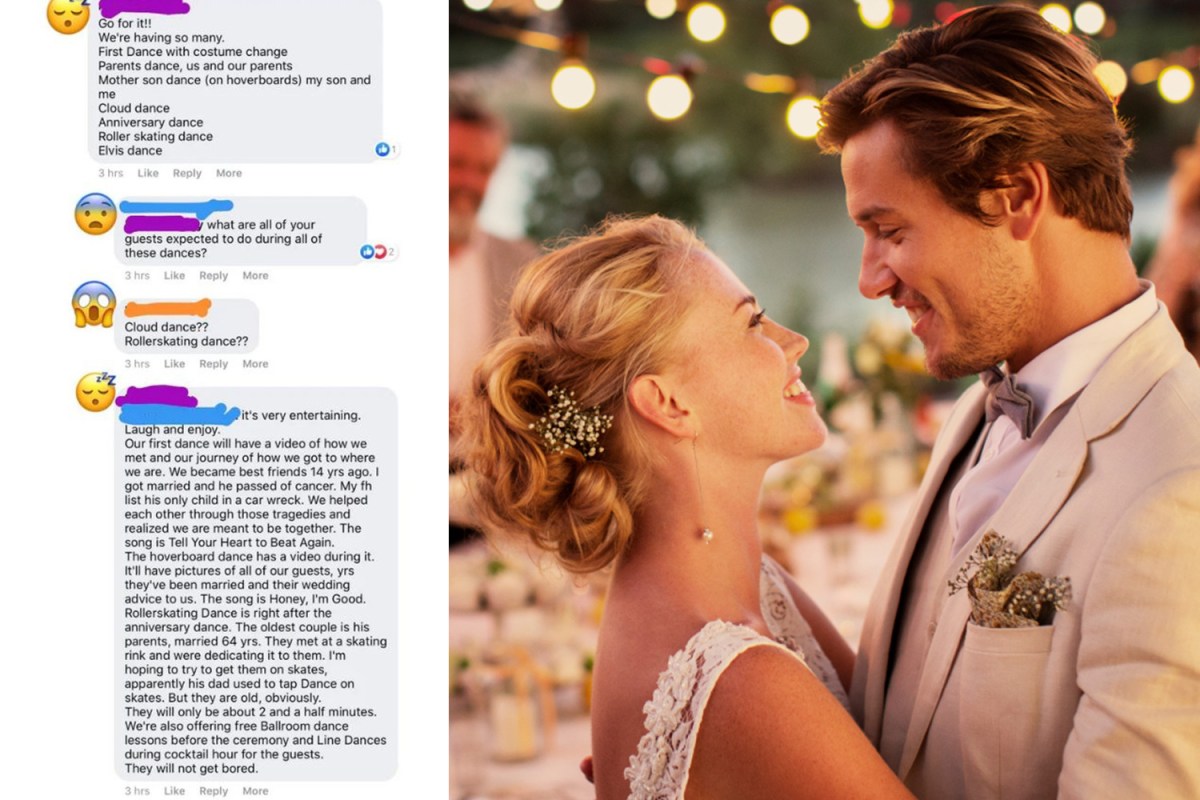 A BRIDEZILLA has been mocked for her bizarre list of seven first dances at her wedding – including “costume changes”, hoverboards and roller skating.

A screenshot of the woman’s excessive dance floor plans was shared on Reddit’s Wedding Shaming group – where people were horrified.

The admission was made in response to another bride’s plan to have five dances.

The bride wrote: “Go for it!! We’re having some many.

In the Facebook post, the bride was immediately bashed with someone asking: “what are all of your guests supposed to do during all of these dances?”

But this failed to ruffle the bride, who replied: “it’s very entertaining. Laugh and enjoy.

“Our first dance will have a video of how we met and our journey of how we got to where we are… The song is Tell Your Heart to Beat Again.”

She also revealed plans to get her in-laws, who have been married 64 years so are presumably in their 80s, to take part in the roller skating dance – as they met at a skating rink.

She said: “I’m hoping to try to get them on skates, apparently his dad used to tap dance on skates. But they are old, obviously.”

Bizarrely, the happy couple also plan to throw dance lessons on their big day, in case their guests’ skills aren’t up to scratch.

The bride added: “We’re also offering free ballroom dance lessons before the ceremony and line dances during cocktail hour for the guests. They will not get bored.”

If you thought this was bad, the dances are going to last two and a half minutes each.

Commenting on the post, one gobsmacked person said said: “This sounds so obnoxious. It’s a wedding, not a musical. Guests won’t tell her to her face, but no one’s interested in or entertained by this ridiculous production.”

While a second wrote: “Cringing at the thought of having to watch this. How self involved do you have to be to think people want to sit and watch you dance for that long?”

And a third commented: “Two people in their 80’s (possibly a wine or two in) on roller skates, what could go wrong! Laugh and enjoy!”

William ‘dumped Kate during hour-long call when she was at work’, expert says

October10: Someone who’s already caught your eye is back to take things further

Other bashed the bride, saying: “This literally made me laugh so hard that she thinks this will A. Be entertaining to guests and B. The grandparents are going to roller skate lol”.

One woman mocked: “‘they will not get bored’ … Babe, I got bored just reading it…”

While a second joked: “This is far too much... No one wants all this nonsense.”

Others said: “I’ll be at the bar – or in an Uber on the way home if dinner has been finished.”

While another person commented: “It’s just a lot for a second wedding for a couple in their forties.”