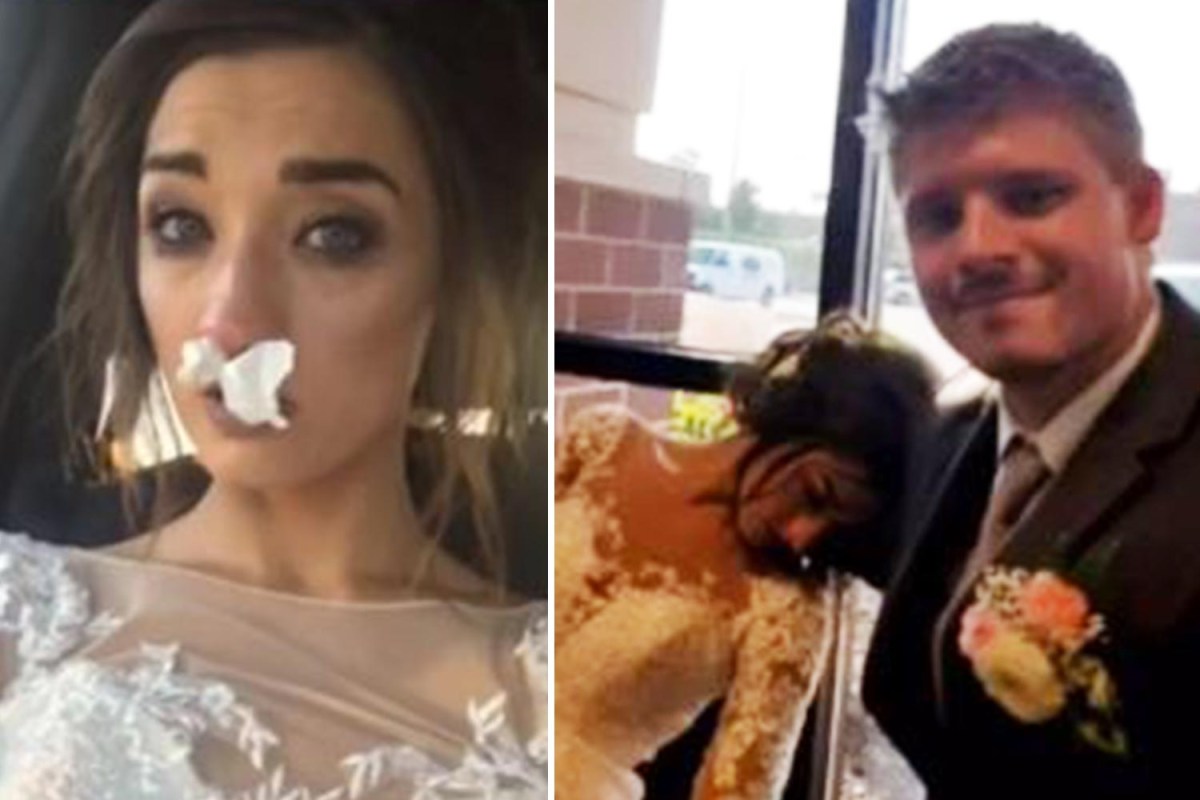 PEONIES, roses and sweet peas are popular for bridal bouquets for a reason.

Not only are they beautiful and smell heavenly – but they’re also a VERY slim chance they’ll accidentally blind you as you’re walking down the aisle.

And while we can’t blame Christine Jo Miller for wanting to go against tradition, we imagine she’d do things differently after her wildflowers caused a poisonous reaction on her 2017 wedding day.

In a series of TikTok videos, Christine explained how she thought it would be romantic to use the snow-on-the-mountain flowers that grow in the allotment she’d bought with her husband in Nebraska.

In the days leading up to the wedding, the bride-to-be picked enough flowers to fill a whole truck – but little did she know how poisonous they can be and can cause reactions similar to poison ivy.

The night before the wedding, the bride and her girlfriends spent the evening arranging the wildflowers with white roses and baby’s breath.

However, Christine woke up on wedding day to find her face was covered in a nasty rash from the sap residue.

Posting a photo of herself lying on the floor, she wrote: “I started feeling sick and feverish from the pain.

“So I did the cucumber trick and slept while I got my hair done.”

But while she’d covered her eyes in slices of cucumber, Christine was horrified when she realised she’d lost her vision because face was so swollen.

At 11:30am, Christine was rushed to the nearest emergency room – but to make matters worse, it wasn’t open as the wedding fell on Labor Day weekend.

Amazingly, the bride was determined not to let the allergic reaction ruin her big day and found the strength to still walk down the aisle.

She wrote: “I wasn’t dying so I thought I just needed to suck it up. Tried to do make-up – was in too much pain so I ended up sleeping until my mom said it was time to put my dress on.”

What’s more, Christine says she couldn’t keep her eyes open but it also hurt to have them shut.

After finally putting on her dress, the bride then forgot her heels which meant her train picked up “very single branch, leaf, [bit of dirt]” at her outdoor wedding.

Once they’d said the vows, Christine was taken to a nearby hospital where she was given eye drops, pain medication and a steroid shot.

Meanwhile, her new husband Jon rushed to a nearby Target to get Christine some comfy clothes to change into.

By the time they got to their reception, she said: “We didn’t want to a first dance because I didn’t want to be the centre of attention out of embarrassment.”

When a guest tried to get her to dance, Christine screamed in pain and says she spent most of the rest of the day under a table to avoid any attention.

And while there’s no denying Christine’s day didn’t quite go as planned, the bride and groom did spend the rest of their night eating pizza in their hotel room – which doesn’t sound all that bad to us.

A week later after the swelling went down, the photographer arranged a surprise wedding reception for the couple and they’ve now been married for eight years.

William ‘dumped Kate during hour-long call when she was at work’, expert says

For more wedding horror stories, this is the awkward moment flower girl accidentally kicks younger girl in the FACE while doing flip during wedding ceremony.

And horrified people slammed ‘gross’ wedding dish of eggs with peanut butter and JAM & they hate it came on a paper plate too.

Plus this is the cringe moment drunk guest ruined the wedding by chucking food at the bride… and she’s absolutely fuming.