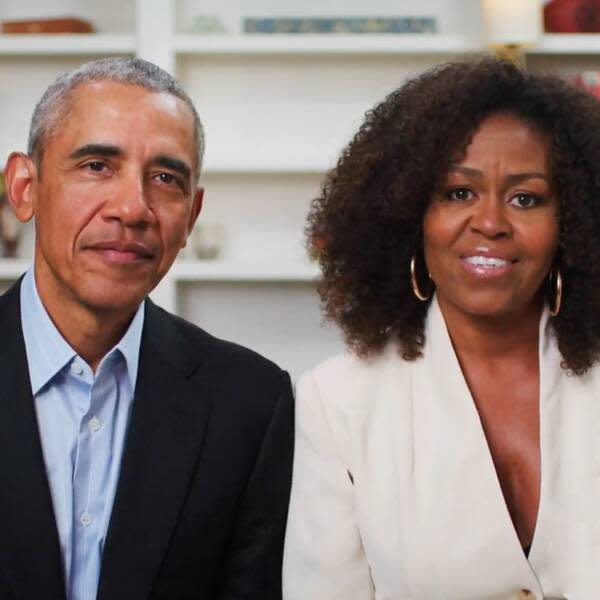 The longtime couple, who happen to be celebrating their 28th wedding anniversary, took to social media to express their love for each other.

“Even with everything going on, I wanted to take a moment to say happy anniversary to the love of my life,” the former president shared on Instagram on Saturday, Oct. 3. “Every day with @MichelleObama makes me a better husband, a better father, and a better human.”

The 59-year-old public figure also took a moment to speak out about the upcoming presidential election on Nov. 3.

“This year, while we appreciate all your well-wishes, what we’d really love is for each of you to reach out to one person in your life who might not vote,” he added. “Help them get registered. Help them make a plan to cast their ballot… Happy anniversary, Miche. Love you.”

As for Michelle? Her anniversary post was just as heartwarming. “28 years with this one,” she began her post with the double heart emoji. “I love @BarackObama for his smile, his character, and his compassion. So grateful to have him as a partner through everything life throws at us.”

Like her husband, Michelle encouraged her millions of followers to motivate the “person in your life who might not vote.”

“Tell us about it in the comments! That’s an anniversary message of the best kind,” she noted, closing, “Love you, Barack.”

Earlier this year, the Becoming author opened up about the one thing that really made her fall head over heels with Barack.

“One of the reasons I fell in love with you is because you are guided by the principle that we are each other’s brothers’ and sisters’ keepers. And that’s how I was raised,” she said back in July on The Michelle Obama Podcast. “I can say that my family, my neighborhood, my notions of community growing up shaped that view, and shaped the choices that I made in life as I felt your experiences shape yours.”

She later added that she and the public figure have one unbreakable connection. Along with Barack’s natural wit and charm, Michelle explained they share the same visions and have important discussions together.

“We’ve had a great time. We’ve had some interesting conversations because these are some crazy times…,” she pointed out. “We’ve spent a lot of time talking about how our views of community shape who we are, shape our choices and shape our reactions.”

“When you and I think about what’s the inheritance we’d like to leave Malia and Sasha [Obama], more than anything what it would be is that they’re living in a country that respects everybody and looks after everybody,” she continued. “Celebrates and sees everybody. Because we know that if we’re not around, that those girls are in a society like that. They’ll be fine.”